Throughout the world of golf, amateur and professional, golfers, male and female, high, medium and low handicap players are to be seen removing their golf glove as they approach the putting surface on each hole.

The origins of this universal idiosyncrasy is thought to date back to the early 1960s when golf was gaining in popularity on the back of the ‘Big 3,’ Jack Nicklaus, Arnold Palmer and Gary Player as the game became a TV staple watched by millions.

The rationale behind wearing a golf glove – in itself, a relatively modern innovation – is to prevent the club slipping in the grip on impact, but many believe touch and feel on the putting green is improved with bare hands.

The most common proponent of removing a glove before putting was the late, great Arnold Palmer, tucking it into his hip pocket, a process deemed to be, ‘Cool,’ a routine copied by millions over the years. Ironically, Arnie’s arch-rival Jack Nicklaus went in the opposite direction, one of the few top players, male or female, to prefer putting with his golf glove remaining on.

Strangely, five-time ‘Major’ winner Phil Mickelson has even tried improving his putting by wearing a golf glove on each hand, making it a full house of no glove, two gloves and gloved right hand on the green wielding the ‘Flat stick,’ yet he does not feature in the Top-10 all-time best putters on the PGA TOUR.

PGA & Champions Tour star Freddy Couples is one of the few professionals to eschew the wearing of a golf glove, saying, “”Personally, I don’t know how people play golf with a glove,” adding, “Put them on and they’re on skin-tight [so] I don’t know how you hold onto the club.”

But, even more bizarrely, the 1992 Masters champion – who has won 62 titles in a stellar 40-year pro career playing bare-knuckled – has his own way of ensuring his golf grip is secure; he applies super glue to the fingers and thumb on his left hand to prevent the club from slipping, whilst at the same time avoiding the need to wear a golf glove. 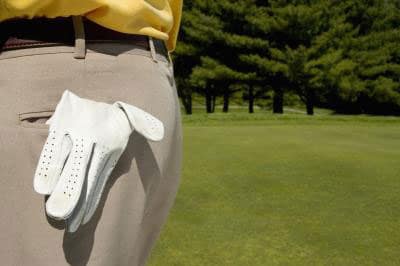 Over the years, and bearing in mind that most professional golfers are superstitious creatures whose often-fragile psyches are reinforced by routine and repetition, various players have developed various customs and practices they believe will stand them in good stead once the pressure is on.

These can range from carrying lucky charms to distinctive, favoured ball numbers and markings, and also, to wearing outfits and colour schemes that have served them well in the past and possibly take them back into a winning mindset.

First to deploy such superstition was Spanish star, the late, great Seve Ballesteros, who would wear his iconic navy blue Slazenger sweater, on top of a sparkling white polo shirt on the final day of a ‘Major’ championship, still, to this day, one of the most evocative images in golf.